Should Minimum Wage Be Increased?

The link above is a more recently updated article that contains all the information you need to know about why minimum wage should be increased.

In this article we give 5 solid reasons as to why minimum wage should be increased along with a complete argumentative essay.
​            $60 for electricity, $150 for phone data, $60 for water, $300 for food, $500 for apartment rent, and $200 for other necessities. Calculating these monthly costs, one would reach a total of $1,270. That may not seem too hefty to families earning more than the minimum wage; however, in reality this is over-budget for families earning minimum wage. Since the federal minimum wage is $7.25 an hour, one would earn merely $1,160 monthly considering they work 8 hours for 5 days every week (ProCon.org). When income is less than expenses, families experience poverty and premature deaths. Despite the hardship individuals and their families encounter, countless national concerns emerge. The population becomes unhealthy and the economy isn’t as efficient as it would be. What people do not realize is that the minimum wage has remained unmodified for more than a decade, causing inflation to surpass it. For the benefit of the majority, the government must increase the minimum wage because it will allow it to compete with the inflation rate, grow the economy, and engender a robust population.

To start with, the federal minimum wage does not provide families with enough income to afford expensive necessities. $7.25 was sufficient when it was established in 2009; however, its value has decreased significantly due to inflation. Although the minimum wage has not been increased in more than a decade, it does not mean that the inflation rate has changed. Approximately 10 years ago, costs of goods and services were 18.84% cheaper (Inflation Rate). In 2009, the living standard was lower; hence, the monthly bills were not extortionate. However, as years pass, things get pricier due to inflation; consequently, an unaltered minimum wage is inadequate for a family. In order to keep up with inflation, it is imperative that the minimum wage is increased to a point where it resembles the living standard. Furthermore, this inadaptive minimum wage puts millions of people in poverty. Earning only $15,080 a year, one’s income is “8% below the 2015 federal poverty level of $16,337 for a single-parent family with a child” (ProCon.org). The purpose behind the minimum wage is so that people have a job that keeps them out of poverty; however, due to inflation, the minimum wage falls short of completing this objective every year. If caring for just one child puts you in poverty by 8%, then running a household would cause you to be homeless. Additionally, the value of minimum wage has fallen so far behind that “Americans paid minimum wage earn just $10,712 a year. That's a third less than their counterparts earned a third of a century ago—adjusting for inflation” (Sklar). Although the United States has progressively gotten wealthier over the years, the working class has progressively gotten poorer even with minimum wage laws enforced. With the current working class earning a third of what the working class earned 30 years ago, the minimum wage has clearly not alleviated the deplorable circumstances. It is unendurable to see Americans suffering because of the federal minimum wage being unable to withstand the rapidly growing inflation rate.

Moreover, straying away from individuals’ financial advantages, a higher minimum wage also results in a healthier population and prevents premature deaths. The overall health of the population can significantly improve by implementing a higher minimum wage because of daily habits and better mental health. A study has shown that “those earning a higher minimum wage would have enough to eat, be more likely to exercise, less likely to smoke, [and] suffer from fewer [...] psychological problems” (ProCon.org). A greater income has an indirect impact on people’s health just by incentivizing them to take care of themselves and adopt healthy habits. The United States, as a whole, would benefit from a healthy population because it improves the statistics of the U.S. health on charts, making it a better country. Moreover, crime causes deaths and the national health to decline due to trauma or torture. This can be prevented by increasing the minimum wage because “higher wages for low-income individuals reduce crime by providing viable and sustainable employment [...] (250,000 to 540,000 crimes)” (ProCon.org). People would be elated if they could freely walk on the streets at night without being apprehensive about criminals; however, unemployed people and many minimum wage earners are compelled to seek extraneous ways to earn money. While attempting to acquire money, one may accidentally kill or hurt the victim in a way that leaves them scarred for life. Any of these consequences hurts the population’s health and may cause unnecessary deaths. In addition, children, especially infants, require special care, causing the expenditure to go up. Since minimum wage earners earn so little, they are unable to afford the products that keep their children healthy; however, “a higher minimum wage [would lead] to health-care gains, including a decrease in infant mortality and fewer child-neglect cases” (Olen). Children are the future of this country and without them, this country would not succeed; therefore, it is necessary that they are properly cared for. Moreover, when children are neglected, they experience mental health issues and struggle to attain the nutrients their body needs, causing the average child’s health to plummet. Although all parents work hard to care for their children, minimum wage earners fail to do so because they are not wealthy enough to buy all the essentials. If the minimum wage is increased, then infants and children will receive the special care they need, allowing them to grow up without suffering from health issues. The nation’s health and death rate are substantially influenced by minimum wage earners; thus, it is crucial to raise the minimum wage. 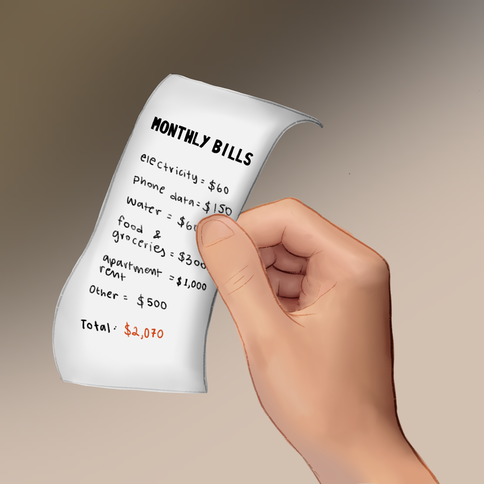